Food for All Update

by April Hoak, Food for All Coordinator 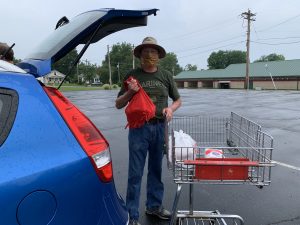 A few months back, Food for All began requesting donations of gently used t-shirts and creative collaboration from volunteers for our t-shirt tote project. Our idea was to make totes from t-shirts to use instead of plastic bags for our Food for All mobile pantries.
The response from parishes and volunteers has been incredible! In the month of October, we will distribute food to our neighbors in these incredibly creative, reusable and environmentally friendly totes. We heard responses from at least 11 different parishes, Common Thread (a crafting group), a quilting group, a girl scout group and many individuals looking to help. I had a number of people share they were tired of making facemasks! These t-shirt totes are extremely durable, stretch to fit an amazing amount of food and are easily cleaned in the washing machine (remember, they used to be t-shirts). 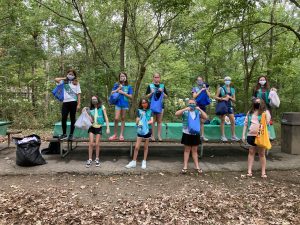 We have been blessed by one incredible volunteer who has made us over 600 totes and has driven to our office at least three times from Fayetteville to bring them to us. It takes her roughly 15 minutes to make one tote, so in time donated; she has given us over 150 hours! She has gone to her pastor multiple times for parish support, is having her 6th grade Christian formation class participate and is working to round up more t-shirts from others.

From this simple idea, we have gained more awareness around what we do and why it is important!

Food for All is looking forward to giving these t-shirt totes full of food to our neighbors in need!

CM fled her native Mexico because she was repeatedly physically abused by her former companion, the father of her now teenage son. As a result of a particularly brutal beating, she was hospitalized in a coma for over a month. When she sought assistance from Mexican authorities, her former companion manipulated the legal system and threatened to have her and her father incarcerated. Her abuser followed her to the U.S. and continued to abuse her in Ohio and Illinois where she resided.

In 2016 she applied for political asylum because of the abuse she endured from her former partner and his repeated threats to kill her. She was living in West Chester, Ohio, working and raising her son, waiting for her asylum claim to be adjudicated by the Cleveland Immigration Court, which has a lengthy backlog of cases. In the early 2020 CM was arrested and transferred to Immigrations and Customs Enforcement (ICE) custody in Butler County Jail. ICE refused to release her from jail, which was particularly hard on her adolescent son, who has been learning remotely since March of 2020. Her father, who has become her son’s caregiver since she is being held by ICE, had his hours cut due to the pandemic.

CM sought representation from the Immigration and Legal Services department at Catholic Charities of SW Ohio because she was not able to afford private representation. Subsequent to her applying for political asylum, then Attorney General Sessions issued a precedent decision that severely restricted the ability of survivors of domestic violence to seek asylum. In several days of testimony at her hearing, CM painstakingly recalled the severe and repeated physical abuse and sexual assault trauma she endured. Fortunately the Immigration Judge agreed with our argument that CM was targeted for abuse because of her gender and Mexican nationality, and he granted her political asylum. This is a hard fought, difficult and welcome victory, given the increasingly difficult path to asylum under this regime. Unfortunately the legal fight is not over, because the government has appealed the grant of asylum, and as a result CM remains detained in Butler County Jail, despite having won asylum and long since finished her criminal sentence.

Like every other program in the agency, Mission Advancement (or “Development”) has experienced dramatic changes, lest we forget that the CEO transition happened just as the pandemic “state of emergency” occurred. Fundraising is often a “bad news is good news” business, because as tragedies, like COVID-19 occur, generous, compassionate people seek out organizations that assist people in coping with that tragedy. As a result, the community – parishioners, corporate and institutional partners – have stepped forward generously to provide the funding we need. This is a credit to our leadership and staff, who have shown so much dedication and resilience in the face of adversity, and particularly to our messaging and communication infrastructure, which was already strong, but then transformed itself to the virtual world of video-based public and donor relations.

From the virtual World Refugee Day in June, the Su Casa Virtual Gala, the Volunteer Appreciation Video, the initial COVID-19 Video, and now the virtual Champions of Mercy event on November 10, storyboarding and scripting video presentations has in many ways, taken over, and we are casting a very broad net across the community. This is a blessing in disguise, because it has forced us into the higher tech, multimedia landscape from which I don’t even think we want to go backwards. We miss the in-person interaction with our donors and friends, but the reality is that we reach many more people through electronic media. I really need to single out the work of David Taylor, who is leading this revolution. Despite the necessary pain of adjusting to new ways of doing things, the results have been phenomenal. When we can, we look forward to in-person gatherings again, but I am confident that we have found new ways to succeed with a balance of being both personal and virtual.

Through August, donations to CCSWO are up by 72%, and total development revenue, which includes donations, grants, and Archdiocesan funding, is up 45%. As much as we were sad to say good-bye to our previous grant-writer, Lauren Matus, our new grant-writer, Mary O’Connell, with whom I only got to meet in-person once after she started, hit the ground running and has successfully raised our grant revenue by over 2 ½ times where it was through August 2019.

I also want to highlight the work of Spring Duncan and Karen Burke. 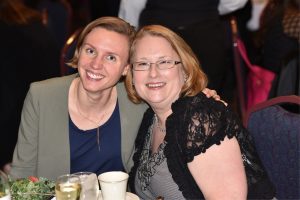 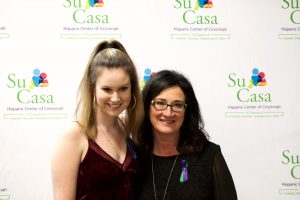 Through multiple difficult circumstances throughout this year, both Karen and Spring have diligently been managing gift entry, database management, and mail and electronic communications. Nothing we do “creatively” can be successful without their “technical” contributions and hard work.

I also want to highlight that over the past year, since our employee survey process, we have been very intentional about increasing the experiences of prayer in our daily work, lest we forget that we are a Catholic agency and an extension of the Archdiocese of Cincinnati. That said, we serve everyone and not everyone who joins our mission is Catholic, so we have strived to be inclusive, without diminishing our Catholic identity. Throughout the agency, more prayer and meditation opportunities have been offered. I have faith that these efforts have contributed mightily to the esprit de corps that I sense across our agency. I think we have grown closer to each other and to our mission by lifting up our cares and needs and remembering that God’s grace drives our work.