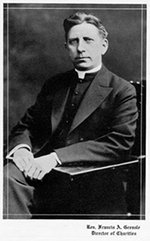 Catholic Charities was created as a result of duplication of the numerous Catholic agencies in service in Cincinnati. Based on the Catholic Charities model established in other dioceses, the Bureau focused on immediate relief work and served as the clearing house for those needing charitable aid. The Bureau received applications for aid and assigned them to the appropriate organization. The first location was at 107 West Ninth Street in downtown Cincinnati and the first director was Fr. Francis Gressle.

The Bureau became incorporated as a not-for-profit organization in February 1924.

A Dayton branch office was established in 1921. Other branches were developed to serve the 19 counties of the Archdiocese, including Hamilton in 1954 and Springfield in 1957. 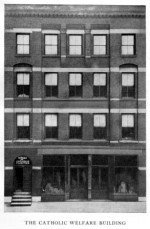 Catholic Charities has provided a broad range of services since its inception.

In the early years, the staff worked closely with St. Vincent DePaul volunteers in providing material assistance for the poor and providing services for immigrant families coming to the new world. The agency moved from that foundation and started programs to meet new needs of society, while discontinuing some programs that had outlived their need.

We are proud of the hundreds of thousands of people served in our almost 100 years of existence. Catholic Charities has stayed true to the vision set out by Archbishop Moeller and Fr. Gressle. From the children who have been adopted, to the families fed, to the vulnerable who have experienced the hope of a better tomorrow, Catholic Charities has always been there to enlighten, serve and empower.