For someone like Jasmine, finding mental treatment is very difficult. 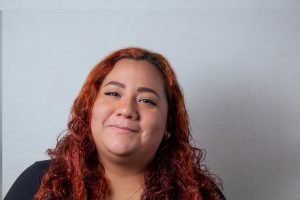 She doesn’t have health insurance and doesn’t speak much English. So when Jasmine began having delusions and dangerous, intrusive thoughts, Catholic Charities was a life line.

“We are one of the few resources in the community for a Spanish-speaking, uninsured individual to get psychiatric treatment for mental illness,” says Laura Hershberger, Mental Health Services Director.

Thanks to the generosity of our supporters, the Mental Health Services team was able to assess Jasmine and get her the psychiatric help she needed. Rosa Reyes-Santana, bilingual mental health therapist, began working with Jasmine in therapy. She referred her to psychiatrist, Dr. Roberto Soria who prescribed her medication to manage her symptoms of psychosis.

Today, Jasmine is working full time and has moved back in with her family. She continues to take her medication, and Rosa has taught her valuable skills, like practicing mindfulness and relaxation techniques, to help her manage her anxiety. Best of all, Jasmine’s intrusive thoughts are gone and she’s reconnecting with her child, whom she once feared she might harm.

“It is great to see her smile and eager to come and participate in treatment,” Rosa says. “She knows she can use different tools to calm her mood. It’s just so cool to see that.”

Because of the care you help Catholic Charities provide, Jasmine now has hope for a healthier, more successful future. That also means a better life for her child and their family. And the impact doesn’t stop there.

“The services we provide nurture a healthier community at large,” Rosa says. “That’s important for all of us.”

A Passionate Voice for Her Community 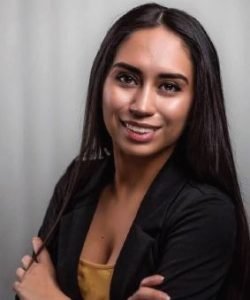 Imagine you are at the hospital. You are in pain or sick. The medical staff wants to help you, but they don’t speak your language. What do you do?

For non-English speakers in our community, language can be a major barrier to receiving the care they need. That’s where interpreters like Suleima Dimas come in.

Suleima joined Catholic Charities’ AccuracyNow Language Services two years ago. What she originally lacked in professional experience, she more than made up for in passion. Today, she is a skilled interpreter.

“I saw her become so passionate about interpreting. I watched her journey from the first training session, asking so many questions, to being so confident about how she would go out and represent us,” says Litz Main, AccuracyNow Language Services Director. “She has done a fantastic job.”

Suleima, 27, is a native Spanish speaker who grew up in the United States before moving to Mexico and then returning to the U.S. as an adult. She had spent her life informally translating for friends and family members. But she quickly realized that professional interpretation requires a larger skill set — and a larger vocabulary.

Suleima might help a laboring mother sign a consent form for an epidural one day, then help a senior neighbor navigate complex hospital paperwork the next.

“There were so many technical terms and medical terms, words that not even a native English speaker might know,” Suleima recalls. But the initial challenges were far outweighed by the joy Suleima feels helping members of her community obtain vital services, such as medical care, or enroll their children in school.

Suleima joined AccuracyNow at a critical time: the beginning of the pandemic. When volunteers were scarce, Suleima filled the void. “I felt like, regardless of the pandemic, people need to be taken care of,” Suleima says. “It was hard, but I was never afraid to step in.”

Leticia Davis, The Power Within 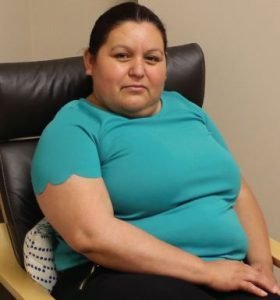 Eighteen months ago, Leticia Davila was a different person. The “old Leticia” was frightened and resigned. After 16 years in an abusive relationship, she had lost herself.

Leticia says her breaking point came when her partner choked her and left her mouth bloodied — in front of their children. She knew something had to change. The next day, Leticia met with her bilingual Catholic Charities social worker, Maggie Waddell, and got the support she needed to make the life-changing decision to leave her partner.

“Maggie said, ‘You are in danger and need to do something now,’” Leticia recalls. “She told me, ‘You have the solution in your hands.’” Maggie helped connect Leticia to organizations like Women Helping Women and Casa de Paz, which provided Leticia with safe shelter, personal items, clothing and other necessities to begin rebuilding her life. Leticia also received access to Legal Aid and had the chance to take exercise and yoga classes to improve her overall wellness.

Earlier this year, Leticia secured a new apartment, achieving her goal of moving her family out of the shelter and into a permanent home. Her children were surprised when she showed them their new place — but they shouldn’t have been, Leticia says. “They said, ‘We didn’t think you were going to do it, Mom,’” Leticia explains. “I told them, ‘If your mom says she’s going to do something, she’s going to do it.’”

Leticia has taken back control of her life. She’s even serving as a role model, giving advice to empower other women to break free from abusive situations. And she continues to receive counseling from Maggie, who says, “The ‘new Leticia’ isn’t actually so new at all. She’s always had it within her.”

Now settled into her new home, Leticia has her eyes on her next goal: owning her own Mexican food truck. 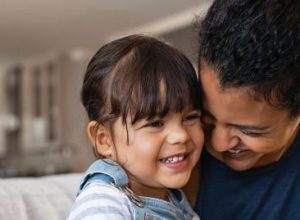 In Luke’s Gospel, Jesus tells us: “Whoever welcomes this little child in my name welcomes me.” Through Catholic Charities, you welcome and support our community’s most vulnerable children.

Children like Adam who was on the verge of being expelled from daycare before Catholic Charities’ Early Intervention Consultant, Maribel Gonzalez, stepped in.

Maribel found a therapeutic preschool program that could provide Adam with proper behavioral and emotional supports. Then she worked with the child’s parents, local social services agencies and the daycare providers to get Adam into the new program while also keeping him at his current daycare.

“It was a journey. But the family has made such strides. It’s so rewarding to see!” says Maribel.

Thanks to a grant received in December 2019, Early Childhood Mental Health Consultation last year expanded its services to partner with the Ohio Department of Developmental Disabilities to help children birth to 3 years who are engaged in Early Intervention services. The goal of the grant is to assist families of very young children with disabilities or developmental delays access Early Childhood Mental Health services.

Maribel partners with therapists and family members to ensure that even the youngest children are getting the care they need in the way they need it. Sometimes, that means identifying when a child has a medical issue manifesting itself as problematic behavior. Other times, it’s training parents to create strategies and routines that play to their strengths as caregivers.

Maribel says she functions as “an extra set of eyes” to support families, many of whom are in crisis. Part of her work focuses on helping families know when, where and how to ask for help — and to give themselves the grace to ask for help in the first place.

Through collaboration, consistency and patience, Early Interventions can make an impact today that changes a child’s entire future.

“One of our goals is to ensure children are receiving the help they need rather than being labeled as bad behavior and being expelled from school,” Maribel says. “At the end of the day, for a student to be successful in a fifth-grade classroom, they have to have a strong foundation much earlier in life.” 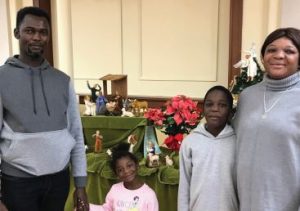 Samuel is new to Cincinnati, but he’s all too familiar with being considered a stranger.

Born and raised in the Democratic Republic of Congo (DRC), Samuel lived in fear of being persecuted for his ethnic heritage as a Banyamulenge Congolese. When he participated in a peaceful protest against the DRC’s government, his fears became reality.

Samuel’s own neighbors reported him to the police. Then, in a horrifying turn, those same neighbors — people Samuel had known his whole life — tortured him, burning Samuel’s feet and cutting them with machetes.

Samuel had no choice but to flee the DRC. After a grueling trek through 11 countries, he and his family entered the United States through the Eagle Pass, Texas, port of entry and expressed their intent to apply for asylum.

In September 2018, a migrant support agency in Texas, Casa Marianella, contacted Sister Sandy Howe with the Sisters of Charity to see if they would receive the family. They traveled by bus from Texas to the Greyhound station in Cincinnati, where S. Sandy picked them up. In the days that followed, she connected them to Catholic Charities. Victor spoke with the family and ensured they met the criteria for affirmative asylum.

He then built the legal case, prepared all the paperwork, and sent it to government officials. In late 2019, Victor and S. Sandy accompanied Samuel and his family to Chicago for their asylum interview, during which they detailed the danger they would face if they were forced to return home.

Thankfully, the family was granted asylum on Dec. 1, 2020, a year after their interview. While the family waited, they learned English through Catholic Charities’ ESOL program. Catholic Charities also helped Samuel and his wife secure employment cards, so they could get jobs, and assisted them in applying for pandemic relief until they could work.

Today, Samuel and his wife are employed and they look forward to bringing Samuel’s three older children to the United States. With ongoing support from the Sisters of Charity and Catholic Charities, thousands of miles from the land of his birth, Samuel finally has found a place where he truly belongs.